On My Easel, continued 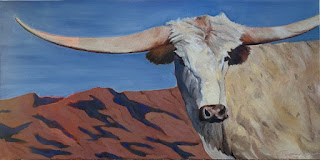 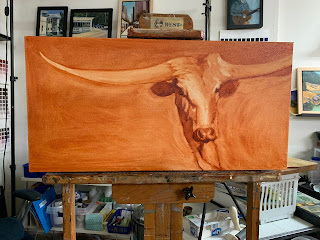 I never get tired telling the story of these longhorn cows that I’ve been painting over and over. A few years ago, Jeff and I took a few days off and drove up to visit the wild Sonoma coast. Our usual inn was booked up, so we decided to stay at a funky little place called Sonoma Coast Villa in the town of Bodega (where the Hitchcock movie The Birds was filmed).

Anyway, I was painting by a pond on the property when a herd of these amazing longhorn cows came wandering down the hillside. I dropped my paintbrush,  picked up my camera and clamored over to the barbed wire fence to meet them. They were gentle and curious but their horns suggested that I keep my distance. Despite my sincere pleas, they refused to stand still long enough to paint their portrait, so I’ve relied on photographs and memories to capture the essence of these lovely creatures.
I’ve never seen longhorns quite like this, usually they are more curly, but these seemed to point straight out or only slightly curved. Maybe they were a new breed, found only in California!


Posted by Tamsen Armstrong at 6:16 PM